Music Hack Day Stockholm: “There are a lot of brilliant brains in da house” 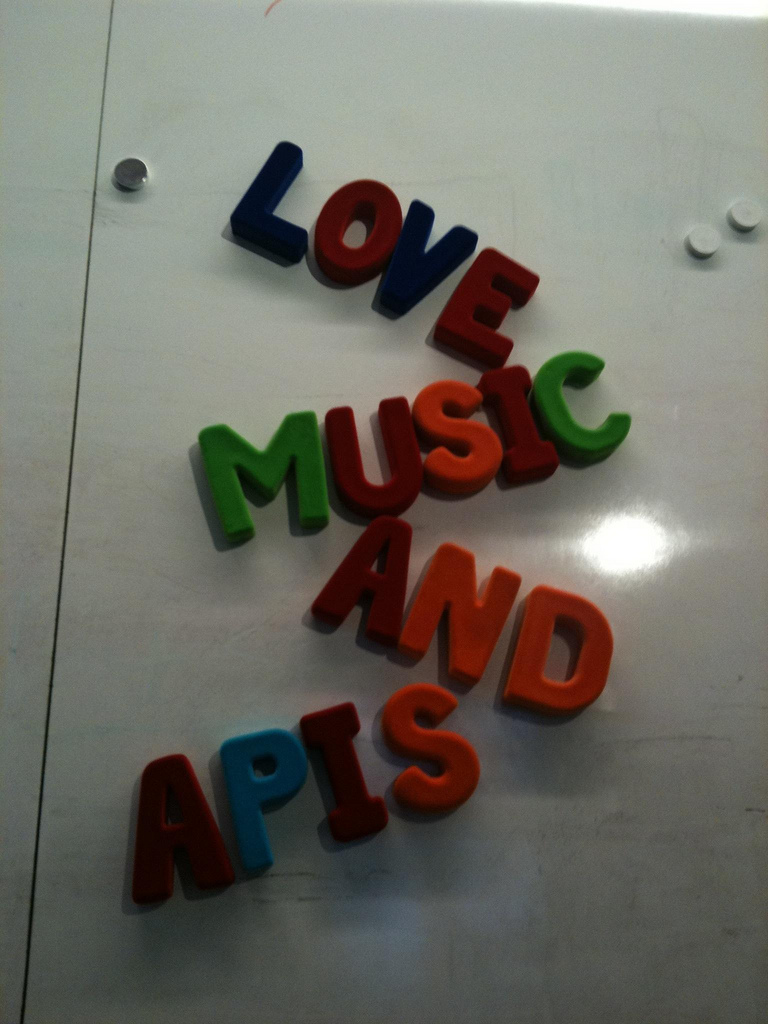 To quote Henrik Berggren, one of the organizers: “There’re a lot of brilliant brains in da house”. I couldn’t agree more. The sessions held by the participating companies were well attended getting lots of feedback and questions in return. There’s certainly no creativity lacking among the ideas and I’m really impressed by the engagement shown by the companies; they’re practically begging for changes, bug reports and new suggestions on their APIs.

The atmosphere is very laid back, familiar and generous, everyone giving a helping hand to a fellow hacker. Not even the freezing temperature of -19 degrees Celcius this morning in Stockholm could keep the almost 90 hackers apart! I talked to Brian Whitman, Co-founder and CTO of Echo Nest, and he was excited about the venue itself, the atmosphere and the feedback received on their API so far. He also gives credit to the organizing team cutting panel discussions of the schedule and focusing on the core business – the hacking itself.

What can we expect to see tomorrow?
Five hours into hacking sessions there are still teams, who hadn’t decided which idea to go for and kept on experimenting with different APIs. Quite a few of the teams were also engaged in “low level” programming not using any APIs.

I ran an early poll on the APIs used in the projects resulting Last.fm, Echo Nest and SoundCloud getting the highest scores. Many of the teams had also plans to do mashups of several APIs.

I’ve spotted a few implementations with the Twitter API, and there’s at least one hardware project in the making with, at the moment, a deconstructed FM radio transmitter involved.

We can alco expect to get some upgrades on the browser version of Citysounds.fm, a music discovery application built on SoundCloud API on Music Hack Day London.

And the spirit of Music Hack Day Stockholm is not only present here in Stockholm. The first project to launch is My City vs. Your City by Michael Schieben, who unfortunately couldn’t make it to Stockholm due to a cancelled flight, but keeps hacking back home in Germany.

Get ready to be wowed at 3 pm tomorrow, but first – It’s pizza and beer time!

Tune into the night of hacking: Watch live and check out the latest pictures!

Paula is Digital Product Advisor and Top 100 Women in Tech in Europe, focusing on Product, Go-to-market, and Internationalization strategies. She has to date mentored over 150 digital technology companies on product, marketing and growth, and rated as one of the very best startup mentors in Europe. Contact Paula to to build engaging digital products and cooperate on #Startups #WomenInTech #GenderEquality #ClimateChange and #OpenWeb. Read more about her work and connect @Twitter, @LinkedIn. “You never learn anything when you speak, only when you listen” – Roelof Botha / Douglas Leone, Sequoia Capital
Don’t miss the future of DATA in Berlin – Register now for Next11!