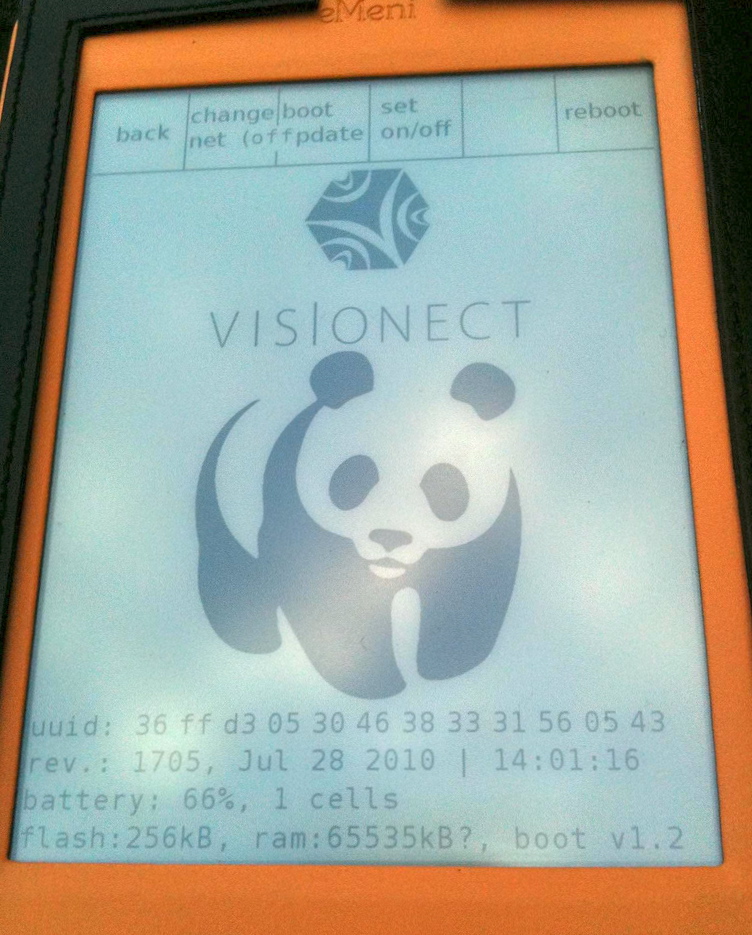 This site mainly a home of promising Swedish startups. But, it’s also a home of all stuff awesome, and as it happens, sometimes you run into things that just make you go “WOW”. No matter the country of origin. And, even if I can be classified as a geek, I assure, a new shiny gadget in various colours and with a cute bear, is itself simply not enough to gain my interest.

Last time I caught myself saying “WOW” out loud was with Prezi. This time it’s Slovenian Visionect, one of the Mini Seedcamp Zagreb winners, who I recently met in London at the great Moo Summer Party.

The three co-founders Matej Zalar (CEO), Rok Zalar (Head of R&D) and Luka Birsa (CTO), have bootstrapped the company at University of Ljubljana Incubator since fall 2007. After the first demo of the enterprise tablet system eMeni in fall 2009, Visionect has been piling up innovation awards in Slovenia. It was also chosen as MobileMonday Slovenia (MoMoSlo) winner to represent at the Mobile Premier Awards.

Pilot tests of the system targeting hospitality (restaurants and hotels), named after Geoffrey, the buttler taking care of any requests in the tv-series The Fresh Prince of Bel-Air with Will Smith, were started last month at various local venues. The device has been received with great enthusiasm, and instead of being threatened by it, bartenders find it helpful. A very important fact when introducing new workflows and routines in businesses with long traditions.

The system runs in the cloud on open source software and uses common front end web technologies, which makes it easy to port existing web applications. Payment systems are on todo list, currently being solved via payment systems at a venue. For time being the system connects via proprietary WiFi, but support for new WiFi solution is being tested as we speak.

Why I find this very exciting? When a team of three with help of few developers can bootstrap a development of a wireless no buttons hardware device with less manufacturing cost than a Kindle, with multiple uses and incredible three to nine months battery length, recharged in six hours, I applaud. Moreover, I had to be careful not to blow my mind when listing all the endless functions, business opportunities, and markets I could think of.

Just a thought: Think of bringing this lovely, choice of your colour, wireless device to the beach. Now you can, besides from checkin’ in to the beach, finally read your content digitally without worrying about the heat, sand and water drops, not to mention the battery issues. You just come home and throw it into the dishwasher after dinner 🙂

Last, but not least, this is also a team that showed great promise to pass my 8 hour car ride test. Remember, you read it here first.

Rok Zalar and Luka Birsa of Visionect, with “Geoffrey”

Find out more About Me and fellow Top 100 Women in Tech in Europe. Connect with me on Twitter, LinkedIn, Facebook, or just drop me a line! Subscribe to my Feed, Startup Advice, and Swedish Startups Twitter list. And remember, “You never learn anything when you speak, only when you listen” – Roelof Botha / Douglas Leone, Sequoia Capital

Selected Official Blogger LeWeb’10. Get Your Ticket For LeWeb’11!