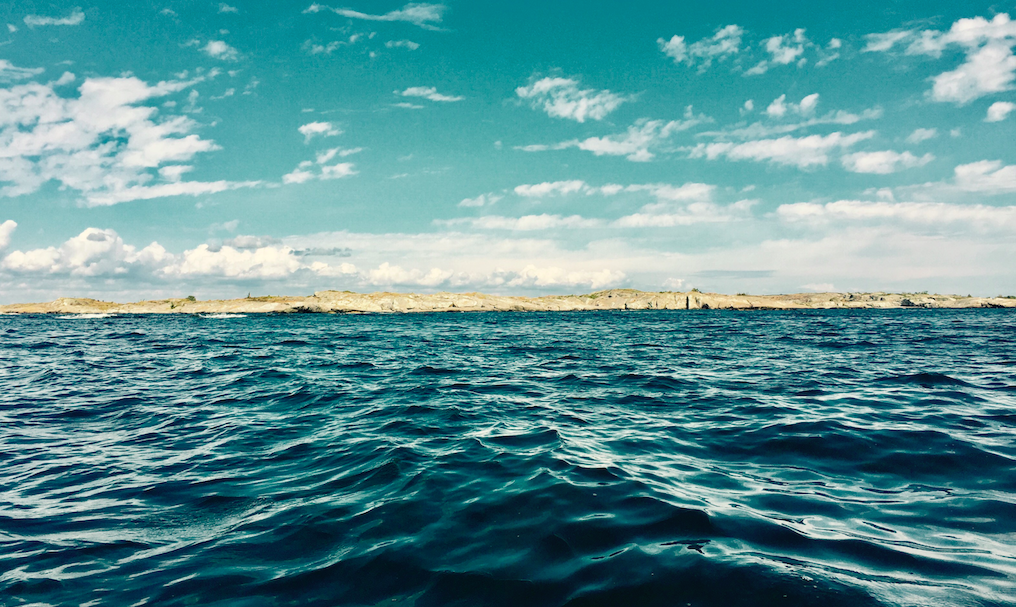 Born in Finland, the land of thousand lakes, 188 000 to be exact, I grew up eating a lot of fish and watching Jacques Cousteau‘s sea adventures. The best thing I still know is my grandfather’s freshly caught pan fried Northern pike. For decades I’ve also called Stockholm by the Baltic Sea my home, but one doesn’t have to live by the sea, or prefer fish, to find the recent image of a stranded, severely suffering beaked whale on the Norwegian coast, with 30 plastic bags in its stomach, haunting.

We’ve now had three consecutive years of record-breaking heat, and a new study shows, that oceans take very long time to cool down, making sea levels rise long after emissions have vanished. Dangerously high levels of neurotoxin are also linked to warmer ocean temperatures, 2015 being the first year domoic acid was found in crab meat, threatening the entire shellfish industry. At times when the Paris Agreement to combat climate change might be threatened, and the world at large seems to be in turmoil, it’s ever important to highlight the tenacious work of researchers, entrepreneurs, and activists around the world preserving our oceans and marine life.

Raising awareness has become a battle within a battle. The fact that ocean is out of sight for most of us, and fossil fuels, farming, and forestry being the main sources of greenhouse gases, make it harder for people to feel engaged. Few great examples of raising awareness: Sweden’s pledge to cut all greenhouse gas emissions by 2045 caught the world’s eye and went viral. Finns now have Baltic Sea calculator to find out much ones diet and lifestyle habits produce algae in the Baltic Sea, one of the world’s most polluted seas with over 80 million people inhabiting the catchment area. Despite fairly healthy lifestyle choices my footprint counts up to staggeringly 180 gallons of algae per year, yet half of an average footprint. The amount gets beyond terrifying once you multiply it by 80 million. Baltic Sea Future Congress in Stockholm is one of the initiatives that brings together stakeholders from the region. Race For The Baltic, founded by Skype co-founder Niklas Zennström, is working to bring together 1 500 municipalities to innovate and restore the Baltic Sea environment. It initially raised awareness by organizing a 2 300 mile bike ride around its coastline. Billionaire Richard Branson and actor Adrian Grenier swam 20,5 miles across the Strait of Messina, known for its unique marine ecosystem, to make a case for our oceans. Sisters Melati and Isabel Wijsen, founders of the Bye-Bye Plastic Bags in Bali, wrote letters to its governor every day until he agreed to say “bye bye” to plastic bags littering the beaches. Project Seagrass raises money for its mission to preserve seagrass ecosystems by running marathons.

Not into biking, swimming, or running? Enter VR, virtual reality. Research constantly shows that experiences in VR can impact behaviour in the real world. Stanford researchers took note and released The Crystal Reef 360-Degree VR Experience, a ghostlike future ocean where acidification has occurred. Following study verified that simulation caused a greater sense of empathy than a similar video-only experience. Lonely Whale Foundation, co-founded by Adrian Grenier, is a “spokeswhale” for marine life. Its Cry Out: The Lonely Whale Experience is a HTC Vive VR experience including interactive chairs using motion sensors by Dell, letting a user experience changes in depth and feel the fish swim between ones legs.

Oceans are not only getting warmer, they’re getting severely polluted as well. The U.N. estimates, that 8 million tons of plastic waste being dumped into oceans yearly,  a pace that will lead to more plastic than fish in the oceans by 2050. Only 14% of plastics are being recycled, a ratio Plastic Bank from UK is challenging by turning plastic waste into a currency to help reduce global poverty through its recycling program, now fully operating in Haiti. More companies fighting ocean plastic waste: Dell has a pilot program to transition ocean plastics into packaging, ready for production this April. The Last Plastic Straw is an initiative to put an end to the daily use of 500 million single use plastic straws in U.S. alone. Skip your next plastic straw! I’m also very excited and proud to add Finnish Kotkamills, based close to my home town, to the list of companies fighting plastic waste with its new innovative packaging material. The recyclable material is both water- and greaseproof without using any plastics, especially the well-know carcinogen fluorochemicals. It’s well suited for both frozen and fast food packaging, not to mention single-use coffee cups. Kotkamills is already on its way to deliver total of 300 tons of packaging, with Norway, Sweden and Germany as its first foreign markets. Dear Baltic Sea and our bodies are thanking! Another innovation I want to see as an industry standard comes from Saltwater Brewery, a microbrewery in Florida. It’s edible six pack rings made of barley and wheat remnants from brewing process are feeding animals instead of killing them.

Plastic waste isn’t the only pollution  hurting marine life. Noise pollution disrupts whales’ communication and navigation system, often leading to fatal strandings. This year has already seen the largest mass stranding of whales and dolphins in decades in both Florida, Ireland, and New Zealand. For more quiet oceans, the Obama administration leaves behind the largest marine reserve prohibiting drilling, mining, and commercial fishing, and the fast growing market for silent electric boats is expected to reach $20 billion by 2027.

Digital Ocean – The Era Of Artificial Intelligence And Autonomous Ships

As with autonomous cars, it’s not a question of if, but when the autonomous ships are here. Rolls-Royce, a UK company pioneering in autonomous ships calls this “Ship intelligence era”, expecting autonomous vessels in small scale operations before end of 2020. AI, artificial intelligence, will play a key role in remotely controlled ships to predict failures and teach machines good seamanship, whereas sensors and drones will provide navigation logistics and create holistic information around the ship. All this relies on constant connectivity, a challenge suited for both Qualcomm’s Snapdragon Flight, and Finnish company KNL Networks providing high-speed Internet in remote areas. How will then oceans and marine life benefit from autonomous ships? The autonomous fleet will reduce the burden on our oceans with more standardised and higher quality ships, offer improved efficiency with better coordinated cargo, and naturally run on biofuel and electricity. The future with more seamen on the shore remotely controlling autonomous ships will also be safer from accidents and piracy.

AI, drones, sensors, AUVs (autonomous underwater vehicles), and acoustic technologies are also playing an increasing role in protecting marine life and counting fish, a prerequisite to protect marine life. Climate change is disrupting ocean conditions so fast that it’s getting harder to rely on estimates using traditional trawling, a method where most of the fish die after being released. New technologies offer ways to count fish without taking them out of the water, giving access both to untrawlable habitats, as well as bottom-dwelling fish. Centre for Marine Futures in Australia is building an open living global database of marine health and fish populations with help of GoPro cameras and AI. The Wave Glider from Liquid Robotics, first wave and solar powered ocean robot with extensive underwater monitoring capabilities, has multiple use cases varying from tracking great white sharks to crack down on the $23.5B yearly global cost of illegal fishing. The Mayflower autonomous ship running entirely on renewable energy, and using drones to gather ocean data, will sail in 2020 from England to America marking the 400th anniversary of the pilgrims journey.

As an example of how human ingenuity can change the course of events when we make up our minds, President Obama talked at Our Ocean Conference about the shrinking hole in the ozone layer after new ways were invented to produce deodorant instead of aerosol cans. A clear testament to human ingenuity is a microbrewery in Florida innovating to protect marine life, why I remain hopeful about a future where VR won’t be the last resort to experience oceans, while the real life Hitchcock movie, The Birds, is playing outside with neurotoxin filled seabirds. No challenge is too big.

Few great hashtags to find inspiration and ways to get engaged to help our oceans: