“They don’t understand – there are women here, they’re in power, this is not a sexist environment. I was raised by a single mother, and I went through every little “Who do they think they are.”

That was the first response Jon Stewart, The Daily Show host of 16 years, had when pointed out to him, that there were no women writers on the The Daily Show. He then sat down in the writers room, and realized that they were all white dudes, just with various forms of facial hair. The Daily Show had a policy to not put name on the writer submissions, and Jon thought, that it was what made them progressive. “What we forgot was that the system doesn’t funnel you women, it funnels the same people it has been funneling the past 30 years. It’s a self perpetuating system. You have to do that actively by saying to agents: “Send me your women”. “Everybody has blind spots, and it’s very hard to overcome your own ignorance, and that’s what I had to face in myself, which is gut-wrenching, sometimes.”

The Daily Show with Jon Stewart didn’t just change the late-night TV and news reporting in general with its explicit fact checking format, but all the learnings of its internal journey to gender equality and diversity are now spilling over to other comedy writers rooms via its highly successful alumni. An excellent example is The Late Show with Stephen Colbert #LSSC and its diverse writers team. On the International Women’s Day it brilliantly demonstrated what A Day Without Women Staffers would look like, including a script written by only the male writers, naturally all about Star Wars, monster trucks, and male genitalia. Golden.

“Black women and lesbians are liars!”

SNL alumni Seth Myers of Late Night with Seth Meyers has a groundbreaking segment called Jokes Seth Can’t Tell, where two of the female writers, Amber Ruffin, black, and Jenny Hagel, lesbian, deliver the punchlines to jokes that otherwise would be difficult to tell by a straight white male. Refreshing and hilarious!

“Change is effort. And it’s not effort for effort’s sake. It’s effort because it makes the show better and stronger.”

Nothing of late I’ve seen screams blind spots and unconscious bias in gender equality like the image above of 100% white male board of directors of Byggnads, Swedish trade union for construction workers with 99% men. It was posted on the International Women’s Day in support of women, and even though meant as a good-hearted intention, it rightfully backfired, creating a public outcry. This happened despite that Byggnads had already back in 2014 made gender equality its top priority, with a goal to increase number of women from 1% to 5% by 2022. Instead of profiling the very 1% of its women as an inspiration and role models for its future female employees, it chose to demonstrate with screaming pink hats how women have no place, face, or voice within the union. Unsurprisingly, its response to the massive critique rang very familiar to Jon Stewart’s first reaction.

I’ve been both deeply troubled and fascinated about the many parallels between women in tech and women in Hollywood regarding gender equality. When further breaking down the statistics for women in tech the numbers aren’t encouraging, regardless of which side of the fundraising table one sits. Women founded companies receive only 15% of the total seed financing globally. The venture capital industry average for female partners is 7%, respectively 22% for investment team members. For every rare announcement of a new female venture capital partner, I keep browsing through, even if I’m sure they’re great individuals, way too many excited announcements of male partners, associates, and venture partners. This year German tech startups site Deutsche Startups took the price in celebrating International Women’s Day by profiling 100% white male venture capitalists. Only thing missing from the picture were the pink hats.

One that’s committed to gender equality and diversity is EIB, The European Investment Bank with a total fund size of €80 billion. Its “Group Strategy on Gender Equality and Women’s Economic Empowerment” came into force this January, shifting EIB’s focus towards working with clients actively supporting female entrepreneurship and gender equality in the workplace. This also applies to European Investment Fund, co-owned by EIB and EU, with total net commitments of €9.9 billion and accounting approx. 20-30% of European venture commitments in over 600 funds. That’s a lot of Euros to be ignored, even for white males.

“Yes, we wish we weren’t all white dudes…”- Nordic Makers

One can also ask how it is even possible, that in Sweden, a gender equal society and one of the best places for women to live and work, the statistics (representative to Nordics) are almost twice as bad compared to the industry average: Women make only 3% of partners and 14% of investment team members.

Update 200517: It gets worse: A fresh, and truly gut-wrenching research on Swedish government VCs, “Gender Stereotypes and Venture Support Decisions: How Governmental Venture Capitalists Socially Construct Entrepreneurs’ Potential”, shows how radically different female and male entrepreneurs are being described by the VCs, detailed in the comparison below: 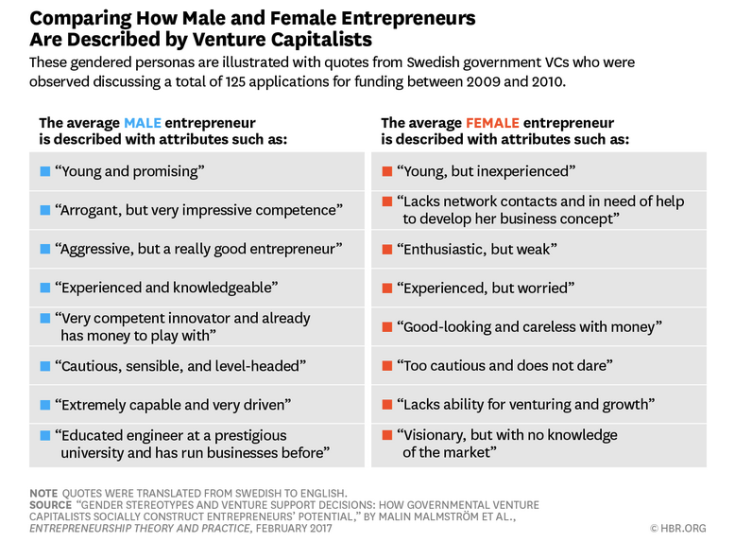 Two important facts about the research that make these findings especially painful:

My personal firm belief, formed over the years observing the Nordic startup and venture capital scene, is that a gender equal society doesn’t inherently equal to gender equal opportunities for entrepreneurs. This is one of those occasions when it hurts to have a research put a stamp of verification on your beliefs and prove you right. Looking to the near future doesn’t make me feel particularly hopeful either. Here are two examples why:

Nordic Makers is a relatively new group of angel investors and entrepreneurs with track record of creating over $10 Billion in combined company value, including four unicorns (#Slush16). All ten male partners are relatively young, have daughters themselves, and are considered to be modern, forward thinking investors. They wish they weren’t all white dudes. Their words, not mine.

The first student-led VC in the Nordics is truly a fantastic initiative, but the young Finnish 100% male founder team of Wave Ventures makes both my Finnish heart brake and eyes bleed. Its blond smiling female CCO only adds to the irony. I now turn my bleeding eyes to its seasoned advisory team with leading Finnish industry profiles, who have the chance of a lifetime to become global role models, change the course of Nordic venture capital industry, and foster true future leaders.

Every new investor announcement means much needed funding to startup ecosystems, so why do I bring up Nordic Makers and Wave Ventures? Statistics show that men are more likely to invest in other men, and to change things for women in the industry, men need to be an active part of the change. If new initiatives started by a younger and more informed generation don’t show any progress in changing the status quo, what will? When they no longer can raise more funds from European Investment Fund and others unless they have women on the team? The Nordic countries are known to rank high on innovation, so why not take the lead and apply it to venture capital industry, too? Whenever there’s a new 100% white male investor team, all I see is the image of Byggnads embracing women by wearing pink hats, while echoing the words of Jon Stewart’s first reaction. In the investor world the words are often spelled: “We have invested in women before” and “We want to invest more in women”. And please, don’t come throwing “pipeline issues” back at me. We’re past that point.

What’s characteristic to an entrepreneur, is that she or he neither wishes, nor waits, for change to happen. Entrepreneurs pride themselves to be the change makers.

Every entrepreneur knows that luck and timing play a significant role in a company’s journey to success, but one thing she or he doesn’t do, is to wait for things to happen. So, my dear entrepreneurial venture capital friends: Be mindful, stop wishing, and take the, even if sometimes gut-wrenching, journey that Jon Stewart did. The show will get better and stronger for it.

In some cases it’s almost framed like a favor — “Oh, so you want a diverse lineup? Sure, why don’t you send me a list of 25 people I might consider qualified?” – Anthea Watson Strong

For all the asks and requests I’ve received over the past eight years from men within technology and venture capital looking for women in tech, I’m yet to hear one that begins with: “We’ve done this and this, and searched here and here, without success. Can you help?” The most common answer, when I ask if a startup has female co-founders or team members, is the lazy: “No, but if you know any, please send them our way.” No word of prior effort, i.e. no effort.

As Anthea writes: “It also transfers the responsibility for fixing the pipeline problem from the people with the power and money to solve it to those negatively impacted by the bias. […] If organizations aren’t committing resources of some kind (manpower or money) to addressing the problem, I don’t believe they are actually interested in structural changes.”

So please, we’re here to help when you’re committed to change, but It’s Not My Job to Fix Your Pipeline Problem.